With spring only two months away, homeowners in the Greater Vancouver area will have to contend with a growing nuisance: the European chafer beetle.

According to today’s article in The Province titled “Pain in the grass: European Chafer beetles devastating for North Vancouver lawns”, the beetle larvae hatch under grass turf and then feed on the roots. This attracts birds and animals like raccoons that dig up the lawn to get to the larvae. Pretty soon, homeowners are left with brown, patchy lawns that have been ruined by both the beetles and the predators that feast on them.

We are getting two types of calls,” Mior said. “There are people who have noticed it and know what is happening and there are others who have never seen this before and don’t know what to do. They are freaking out a bit … ”

Bur-Han’s lawn care team also specialized in Nematode Application which is a proven treatment to get rid of chafer beetles.

About the Author: Robert Hannah

Robert loves his wife and family and is a huge Star Wars fan. He bikes and does travel biking. His company portfolio includes our Commercial, Strata, Industrial, and Retail business accounts that service clients from West Vancouver, North Vancouver, Burnaby, Coquitlam, Surrey, White Rock and parts of New Westminster. 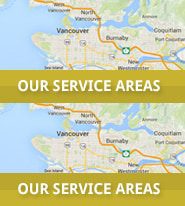 Please provide me with a Grub Gone quote: